I sometimes use affiliate links in my content. This won’t cost you anything but it helps keep the lights on. It goes without saying that my content is based on my experience and I only recommend services/products that I believe in. Thanks for your support.

Dynamic range is an important concept when recording, mixing and mastering music. It is defined as the ratio between the loudest and quietest part of the sound. dynamic range exists in every wave form:

Most of the time, we use compressors to manipulate the dynamic range, but compressors can also color the sound and add depth (or push a sound into the background).

There are 4 major compressor types used in a music studio: VCA, FET, Optical, and Variable Mu compressors. Each of these types is used in different situations to accomplish the results we want in the box and I’m going to walk you through each of them. So, let’s get started.

VCA, which stands for Voltage Controlled Amplifier, are compressors that use control signals to know when to apply gain reduction to a sound. These compressors are used to amplify, reduce the effect, or control the amplitude of the input/carrier signal. They are also used on everything from vocals and percussion to master bus tracks and this is because they have an abundance of controls.

How VCA compressors differ from other compressor types

Examples of VCA compressors are the SSL G Bus and DBX 160. 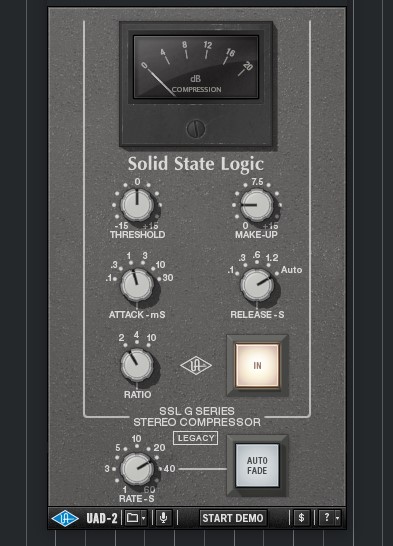 Field Effect Transistor compressors apply compression via a transistor. They are used to preserve more transients and add more punch to sounds. Although they are not as clean as VCA compressors on a mix bus, they are good for individual instruments.

How FET compressors differ from other compressor types

Examples of FET compressors is Urei 1176

Optical compressors or optos use a light-dependent resistor and a light source to dictate how compression is applied. They are generally used for vocal chains together with FET compressors: While the FET is used to handle the sharpest transients, an opto “glues” everything together.

How Optical compressors differ from other compressor types

Examples of optical compressors are LA-2A and Avalon AD2044.

Variable Mu (also called tube or delta mu) compressors carry out compression with tubes and are perfect for instruments or mix buses because of their slow response to transients. They also add warmth to basses, drums, and vocals.

How Vari-Mu compressors differ from other compressor types

An example of a variable mu compressor is the Fairchild 670.

Compression in the Digitial World and new opportunities

Another great thing about compressors as plugins is the ability to recall. Let’s say you mix one song and then move on to work on another track, it is difficult to recall the first song on an analog system. However, with a digital system, it is simple and quick. Using an all digital system affords you the ability to multitask and handle as many projects as you want.

Some plug-ins come with “plug-in only features” that give you more options and opportunities to control and manipulate the sound. An example of this is the FATSO Jr./Sr. Tape Sim. & Compressor plug-in that comes with transformer saturation control, Sidechain Filtering and deeper compression parameters including threshold, attack and release. Those never existed on the original hardware.

Issues when using the wrong compression

Applying too much or too little compression

The gain reduction meter helps you to know how much compression you are applying but the meter doesn’t replace the ears. Learning to hear compression is key to high quality mixing, and the meters are there to help you carry out compression and avoid applying either too much or no compression at all.

Pay attention though, the VU meters will show you reduction that’s closer to RMS measurements and you will want some peak meters or wavescope along with it to see how you really affect the sound.

Ruining the dynamic range and making your audio sound unnatural

Using extremely fast attack times can ruin your dynamic range, thereby making your mix sound flat. For example, using very fast attack times when you’re mixing vocals is a terrible idea because it will shoot down the beginning of the sound, giving it very little room to breathe. This might result in the sound going backwards into the mix.

Extremely fast release times cause the tail end of your audio to sound gritty. Sometimes it’s what you want, and sometimes it can ruin the smoothness and dynamic control. With fast release times, you will get more volume on the tail, in some cases it will be good, but in some cases it might make the reflections of the recording room too noticeable.

Medium to slow release times can also have some impact. Medium times can give you the pumping effect, if the ratio and threshold support it.

The key with compressors is to learn to hear them, to notice how they manipulate the sound in intensity, color, weight and space.

Deviating from the genre

Different genres require different kinds of compression. Genres such classical and jazz are super dynamic and wouldn’t require much compression. Over-compressing them would ruin their tone and lead to something completely different.

A pop mix may require a lot of compressors to manipulate the vocals and the instruments but doesn’t require hard compression. Hard compression might make it sound distorted and powerless.

Rock is aggressive and for that reason requires more compression to highlight its intensity. Not compressing it enough or in the wrong way will make the sound weightless and weak.

Menu
© 2022 - Help Me Produce - All Rights Reserved
Skip to content